Always a chef at heart, Michael Scelfo started working in kitchens during high school, and joined the Boston scene in the early 2000s. In 2009, Michael took the helm at Grafton Group's Temple Bar, and the next year opened Russell House Tavern as the Executive Chef. In early 2014, Michael opened Alden & Harlow, his first solo venture. He's now actively engaged in the launch of Waypoint, a New England inspired seafood restaurant opening outside of Harvard Square very soon!

Senior Cheese Buyer David Robinson reached out to talk about food and Michael's soon-to-open next restaurant. 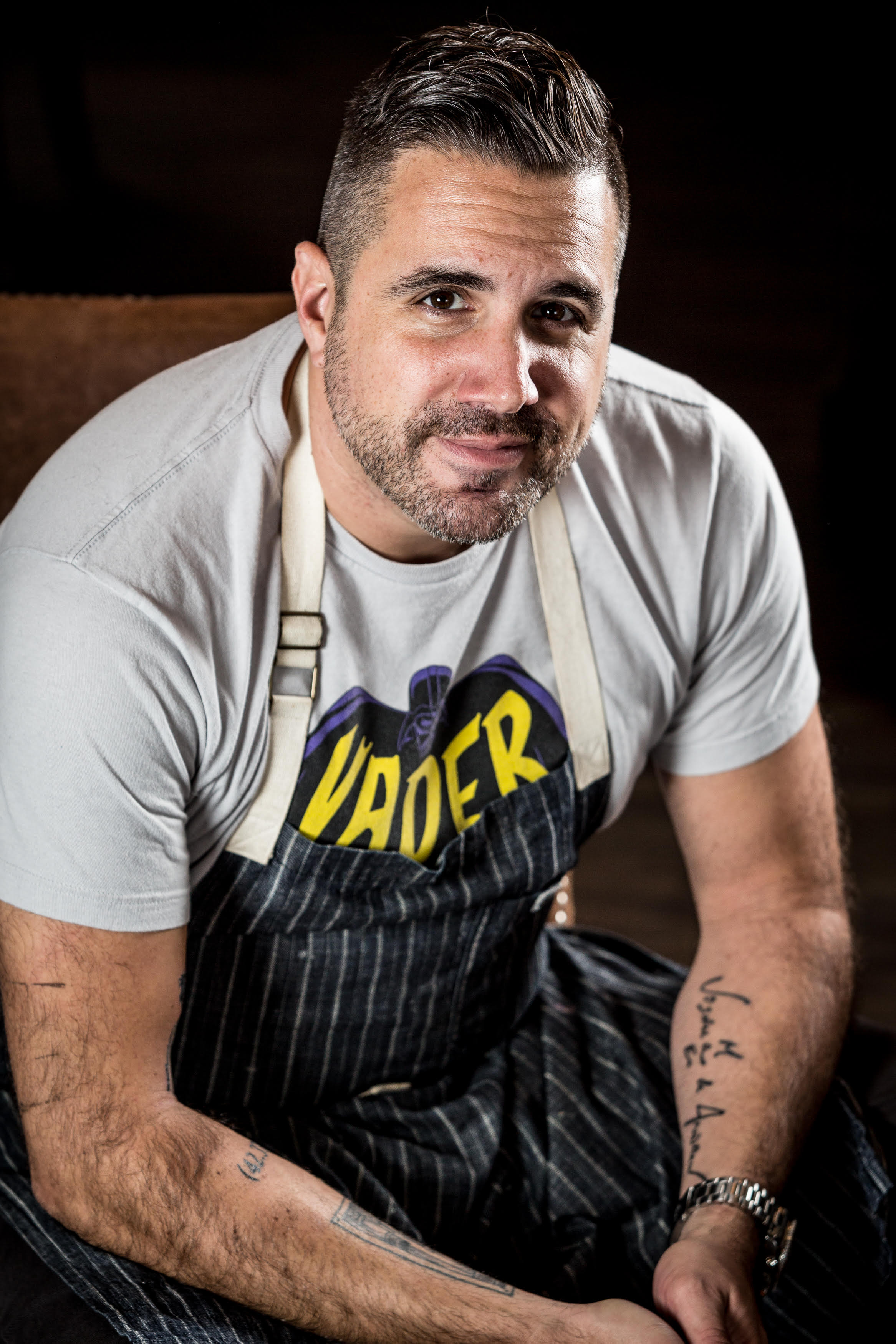 David: Let's start with one of the more interesting questions for me. How did you get started in food?

Michael: A fairly typical story. I come from a large Italian family where my mom cooked and my grandmother as well. Food was the center of our social world. When we came together, it was usually focused around the table, whether for a special occasion, feast, or just lunch on the weekend. There was always a huge spread. I always loved it but never really considered it for a career, and then went to school for something else.

David: What did you go to school for?

Michael: Journalism. Yeah, I wanted to be a writer. But I was in my early 20s, kind of lost, didn’t know what was going on, and eventually went down the food path. Even while I was going to school, living in a typical college house with seven people in it, here I was cooking dinner for everyone. I had to do some soul searching.

David: Were you working in restaurants at that point?

Michael: I was dabbling. I worked in local Italian joints doing prep in high school, then spinning [pizza] pies in college. Eventually I started working front of the house and learning to bartend and wait tables. I waited tables for about 4 or 5 years, and I really loved interacting with people and the whole service, but I made my way to the back of the house and stayed.

David: Did you go to culinary school?

Michael: I went to school in Portland, Oregon and cooked there for years. This is what opened my eyes to good food and quality sourcing; seeing food come in on the dirty hands of a farmer who cultivated or harvested it. Or watching some crazy mushroom dude out foraging - that was an eye opening experience. It definitely shaped me and sent me down a path. I still apply all of those fundamentals in all that I do.

David: You’ve been in Boston for 15 years now. What was the path that led to where you are now?

Michael: After I married my wife Ellen, we moved here. I was offered a chef position that quickly fell apart, and I soon found myself without a job. I ended up at Tea-Tray in the Sky in Arlington. I was a young cook in Boston with no ties. I hadn’t cooked for Frank [McClelland] or Barbara [Lynch] or anyone who was relevant in Boston when I arrived. This set me down my own independent path. I worked some small gigs and cultivated a small following. After I got hired by the Grafton Group and I worked with Temple Bar, things really changed. We opened Russell House, and I started to see chefs I admired come in and eat my food for the first time. That’s like an “Oh wow, things are starting to take off now” moment. Thankfully, it hasn’t stopped since, and I used that momentum to launch Alden and Harlow.

David: I think Alden and Harlow is where you have really made a name for yourself and where we at Formaggio Kitchen have gotten to know you. Would you agree?

Michael: I was dealing with you guys for years, but flew under the radar. I was clocking my orders in every week. Take Anson Mills; I’ve buying Anson Mills [from Formaggio Kitchen] since 2002, but you only started recognizing me 2 or 3 years ago. But I was on top of all that, and trying to get things no one else was using. It was about the quality of the product, and that’s why my relationship with you guys is so critical and Formaggio Kitchen is in many ways my test kitchen. I’ll talk to you [David] or Tripp, gather products and go make food for my family. Whatever the kids don’t eat makes it to the menu at Alden and Harlow.

Formaggio Kitchen is my test pantry and more people should use [the store] like that. It’s better than looking at magazines and books. Go to Formaggio Kitchen, gather a bunch of products that you’re not familiar with, and go see what you can make out of it.

David: Do you feel you’ve been able to keep pushing yourself after 3 years at Alden and Harlow?

Michael: We religiously change the menu every Friday, and with the exception of maybe 3 or 4 dishes, out of 25-30 (on any given menu) I’ve never repeated a dish at Alden and I never will. Other than those 3 or 4 dishes, I will constantly keep changing the food and keep offering perspective on where I am at the moment, depending on what is available to me at the moment. And that’s what is awesome about Waypoint. Waypoint is my opportunity to showcase my ideas of another type of food.

David: Since you love cheese and are about to open a seafood restaurant, I think everyone will want to know your thoughts on this particular pairing: cheese and fish. Yes or no?

Michael: Yes! Not as a broad stroke that it will always be OK, but rather based on the profile of the product. I grew up putting pecorino on my clam sauce. I like to put my middle finger to all those classic pairing rules. If it tastes good and it makes you happy, then why not? Enjoy your food. Should we be serving Dover Sole with a cheddar cheese sauce? Probably not, but how many cream laden seafood dishes have you had, especially in this town? How is cream OK, but cheese isn't?

David: We love breaking all those old rules too and experimenting with new pairings.

Michael: Well that’s where Formaggio Kitchen comes in handy. I can walk in any day of the week and talk to almost any monger about flavors and taste, and get answers. That’s a relationship.

David: We have a dinner coming up with you, tell me a little bit about about the Garden Dinner on July 20?

Michael: We do the Garden Dinner every year. It started as a farm dinner, but I thought of the great relationship we have with some of my purveyors, and thought why not use the people we really care about? Formaggio Kitchen is a natural partner, and it’s a great time to play with products and have fun. The dinners are small and personal. We really love them and are looking forward to this.

David: I’ve seen tons of our items at your house - it’s like walking into the shop. What are some of your Formaggio Kitchen favorites, both for home and for your restaurant?

Michael: First, they are one in the same. I don’t use things at home that I wouldn’t use in the restaurants. We buy all of our olive oil from you and we constantly change our cheese plate. The Colatura, the Mazi Piri Piri Hot Sauce, Rogue Chocolate, and I love the sliced meats from Salumeria Biellese. The Robiola Incavolata is probably our number one household cheese at the moment. My kids love it. But we are constantly buying different grains or flours. We also offer a composed savory cheese plate. There are so many different cheeses we have used. I think we bought most of the Rush Creek Reserve you had and pissed a few people off, but we needed it. This is why we use you. And Alden has been like the break room for the Formaggio Kitchen staff. We love having you guys in!

David: And we obviously love going to Alden!

This post is part of our Friends and Family Interview Series. Read our last interview with Ana Sortun and stay tuned for the next one!