Ana Sortun is the Executive Chef and partner at Oleana and Sofra, and partner at Sarma. Since opening Oleana in 2001, she has been acclaimed for her creative use of farm-fresh ingredients and eastern Mediterranean flavors. Ana received the James Beard Foundation’s “Best Chef, Northeast” award in 2005.

In 2006, Ana published her cookbook Spice: Flavors of the Eastern Mediterranean, nominated for “Best International Cookbook” by the James Beard Foundation. The same year, Ana's husband Chris Kurth launched Siena Farm, which has been providing Ana with fresh, organic produce ever since.

In June 2008, Ana and Pastry Chef Maura Kilpatrick opened Sofra, a Middle Eastern café and bakery in Cambridge, and most recently in 2013, Ana partnered with Cassie Piuma to open Sarma in Somerville, modeled after a Turkish Mayhane (or neighborhood tavern). Coming up next will be the release of a new cookbook Ana co-authored with Maura: Soframiz: Vibrant Middle Eastern Cooking from Sofra Bakery and Cafe in October 2016.

Online Media Manager Beth reached out to Ana to chat about spices and her love of Middle Eastern cuisine. 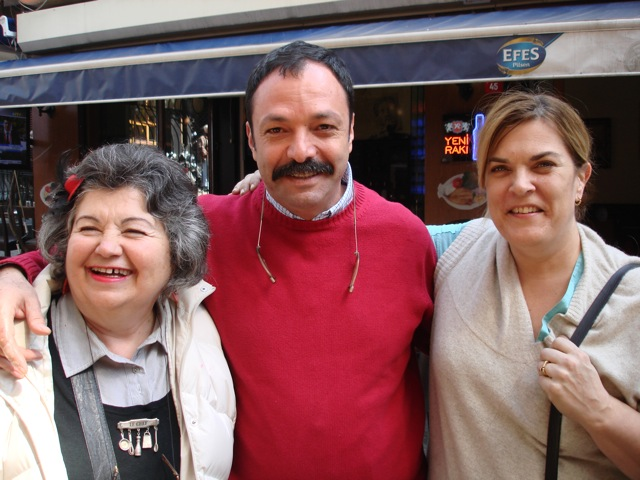 From right: Ana Sortun with friend Chef Musa Dagdeviren of Ciya, and Ayfer Unsal, the woman who introduced Ana to Turkish Cuisine and Turkey 18 years ago

Beth: Can you give me a quick overview of your cooking career - how you got where you are today?

Ana: The vision was to introduce Boston and the area to a broader sense of Mediterranean cooking. A lot of exposure and people’s exposure was that Mediterranean cuisine was strongly represented from the south of France, Italy, Spain, or even North Africa, but the whole eastern side was left out in the sense of Mediterranean cuisine as we know it. Before I opened Oleana, I was working at Casablanca in Harvard square to learn about Turkish cuisine, and it was an opportunity that I didn’t understand at the time but that sounded interesting and exotic (magic lamps and flying carpets) but hadn’t geographically considered it. But it was a pillar of Mediterranean cuisine, so when I went, I was pleasantly surprised and intrigued by the flavors and style of eating. Healthfulness and lightness of food, mysterious rich and neat flavors that were created because of spice, and also unusual tastes that I’d never experienced before. I was completely intrigued and fell in love. That was the turning point, and with that, the vision at Oleana was created. It then became a study from places I visited once or twice a year with more research and more intrigue. That’s how it developed and continues to develop. I still go back [to Turkey] and seek out something new, so that has become a knowledge connection and resource. My other two places are sort of extensions of Oleana with partners that I’ve worked with over years who are extremely like-minded and are interested in the same flavors and showing a different side of the brand. Each place has its own personality driven by partners.

Beth: You and our owner Ihsan Gurdal share that love for Turkey. Are any of his favorite spices - urfa or maras peppers, Sumac molasses, or Aleppo peppers also favorites of yours?

Ana: Oh yeah. Personally I’ve known Ihsan for a very, very, very long time. Going back to that first trip to Turkey. I knew him then maybe 20 years. We have vacationed in the same house together and have been to Turkey together a few times. He’s always been a source of inspiration and knowledge. His access to his ingredients are beyond valuable for me. I’m so excited about all stuff he’s about to bring in. We share almost parallel loves ... pomegranate molasses, that Urfa Pepper!

Beth: On that note, what are your favorite spices and ingredients to use at home and in your restaurants?

Ana: I really love the combination and use of three very particular spices: Maras Pepper, dried spearmint, and Sumac. Those three in combination truly authenticate Turkish flavors for me. The tart sort of raisin quality that sumac brings is extraordinary. The warmth from mint and the gentle oily heat maras brings. And when you put them together, it’s absolute magic.

Beth: Do you have any tips for home chefs as to how to incorporate these?

Ana: The classic combination is having those on something with yogurt. Pasta or ravioli or pastries where we combine a simple tomato sauce with garlic, yogurt, browned butter, and those three spices. So pasta, pastry, dumplings... That’s a really essential combo. We use them a lot separately too. All three are extraordinary in a salad. A simple vinaigrette can just be lemon and olive oil. It doesn’t need mustard or shallots of the typical French vinaigrette because those three spices bring so much depth of flavor and contrast of flavor. Even on a piece of breaded chicken like a cutlet. Dust that chicken cutlet and pan fry it with those spices, and it’s amazing. It totally transforms!

Beth: What do you find to be an underused spice that you'd like to bring to the spotlight?

Ana: For underutilized, Allspice is really interesting when combined with black pepper. In our culture, we associate it with pumpkin pie, mulled spices, and fall. But when blended with fresh ground pepper, it’s delicious with sliced heirloom tomatoes in the summer time, with meatballs and tomato sauce, and things we wouldn’t put it with typically. Use gently or it can be overpowering because it has really bright notes. It’s fun and under-appreciated, but great when blended.

The Urfa Pepper you guys have is one of most extraordinary chilies out there and easier to use and more versatile than most Mexican chilies. It's ready on anything: chicken, cheese pizza, or eggplant. It’s less discovered than maras. In Turkey, you have on the table a choice of urfa or maras. In certain areas, they’re often used interchangeably, but urfa is dark and smokey and bittersweet, and maras is more oily and sweet with brighter heat to it. Both are really versatile. We even use maras in place of black pepper when seasoning as it does similar things and lifts some flavor out. We don’t use a lot of black pepper. Our go-to is salt and maras, with a little lemon for seasoning.

Beth: You've taught several successful classes in partnership with Formaggio Kitchen. Is there a topic in particular you're eager to bring next time?

Ana: The last couple focused on Ottoman and more traditional palace recipes that you might find in typical restaurants in Turkey, but some with a twist. I think it would be cool to do a class on street food and savory pastries - they put pizza to shame. There’s a lot more finesse in the Turkish flatbread world than they’re given credit for. Everyone hears about pizza from Naples and the art of making it, but there’s Lamagen, and pita, and Börek, and things happening in Turkey that take incredible skill and are sublime. It would be fun to do a class on some of these savory pies, which is what I mean by street food.

Beth: As you know, we specialize in cheese. What are your favorite cheeses and is there anything specific you enjoy pairing with them?

Ana: The problem is, I don't retain the stories and names so well and feel like every time I buy a cheese, I should be typing up a story, so when I get home and few days later forget, I can see. I had robiola in cabbage - Incavolata - so freaking good, unbelievable! I love all the cheeses you guys are excited about - they’re extraordinary. When I go to Formaggio Kitchen, I don't go for one particular cheese. I go and ask what everyone’s so excited about and that’s what I fall in love with.

Author, Beth Wittenstein is the Online Media Manager and a Cheesemonger at Formaggio Kitchen South End.

This post is part of our Friends and Family Interview Series. Read our last interview with Barbara Lynch and stay tuned for the next one!