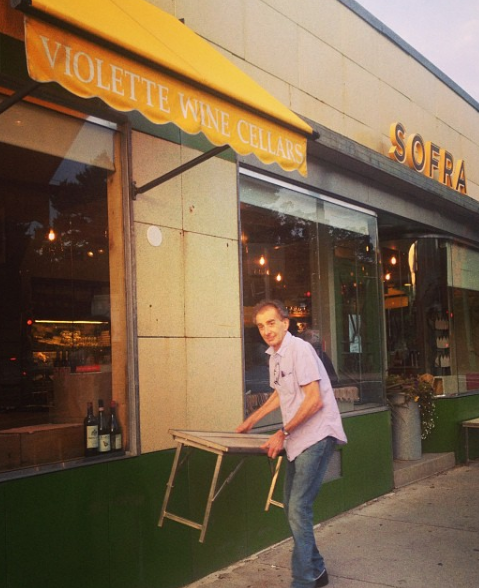 Violette Wine Cellars is the importer, distributor, and retailer for natural and biodynamic wine where Richard Kzirian, long time friend of Ihsan and Valerie Gurdal, has challenged the wine scene for decades. Valerie reached out to chat with the wine pioneer himself about the industry and his perspective on how it has evolved in the last few decades.

Ihsan and I have known Richard Kzirian for over 30 years since he first opened Violette Wine Cellars, then on Mass Ave. We used to go into his stores and order a mixed case of wine - we would tell him if we were having a big party or a lamb dinner for two and Richard would pull together some wine for us. We grew to trust his choices as he learned what we liked and didn't like in a bottle of wine. So when the South End location first opened and we received our first wine and beer license, I naturally looked to Richard for guidance. His palate and patience in educating are immeasurable and I will always be grateful for his support and have the utmost respect for him. I look forward to all of Richard's new finds and can't wait to see where he and Violette will be taking us in the future. Hope you all join me for the ride. -Valerie

Valerie: Obviously most people know you as a wine importer and merchant, but why don't you tell us how you got started in the food business.

Richard: I was studying engineering, going to school, and working in restaurants. Soon food took over everything. So I decided to go to Madeline Kamman's cooking school in Newton.

Valerie: What year was that?

Richard: It was in the late 70's. Madeline was hard nose, old school. I applied for a job at her restaurant (she had a restaurant next to the school) where everyone who got a job had to start at the bottom washing dishes, peeling potatoes, opening oysters, and learning knife skills - even though I just graduated from her school. I got the Garde Manger position and then after about a year, her Sommelier gave notice, and Madeline asked me to take over. I said, 'Madeline, I don't know anything about wine.' She said, 'meet me here Monday morning to go over the wine list.' Back then there were only two fine wine vendors: Classic and Branded Wines. She told me what she was looking for in a Pouilly-Fuissé, Sancerre, a Burgundy, and even an Italian Barolo. I got the bug and started educating myself, and what you see today is that whole process of all I've been learning.

I went on to cook at Maxwell Plums in San Francisco so I could be close to wine country and keep meeting people, tasting and learning. Madeline then opened a school in Annecy, France, and offered me a teaching job. I would go to the markets and do all the shopping there. We served only wines from the Savoie: the sparkling Ayse and Mondeuse.

Valerie: When did you start Violette?

Richard: 1984. I brought in Ravenswood Winery and Sky Vineyards. Business was booming.

Valerie: How did you get started in organics and biodynamics? In my book, you were the one who really introduced organic and biodynamic wines to the Boston area...

Richard: I had been in business for about 15 years at that time, and for about three years I kept getting these invitations to go to a show in Southwest France called Millésime Bio, and it struck my interest so I decided to go. I was tasting organic wines for the first time, and it clearly tasted different to me. I kept going back to this one producer Allain Guillot - I still carry his wine to this day. At that time, I wasn't carrying Ravenswood anymore and had a small portfolio. I welcomed this new challenge of selling these organic and bio-dynamic wines I knew nothing about, but found so exciting.

Valerie: Did you encounter any resistance when you first brought in your organic and biodynamic wines?

Richard: I lost retail customers as fast as can be. Nobody gave a shit - they thought the prices were to high, and as we no longer had Ravenswood, they basically walked away from us. Formaggio Kitchen South End and Cambridge were some of the only retail customers I had.

Valerie: Now there are so many 'natural wine' distributors out there! Has this affected your own shift toward going natural?

Richard: I avoid saying that I'm going all natural. It's not printed on our list, it's just a shift I'm doing. I'm shifting because that is what my palate is telling me. I keep adding and subtracting producers. Some smaller growers have so little wine that they don't even want to sell to me, but I convince them I'm happy with the amount they can sell me and I don't need a lot. To sell these wines it takes a lot of hard work, and you need to educate. It takes a buyer to taste and understand.

Valerie: Another first I credit you with is quality box wine. What made you take a chance on box wine 15 years ago?

Richard: When we went to a grower, it was clear that he had a box wine in his cellar that he served us at lunch. It can't be classified as a Côtes du Rhône because it has other grapes in it - alicante and all these other grapes in it. It was so delicious that I said I wanted to bring some in.

Valerie: Where do you think the world of wine is going?

Richard: In Europe, I only see a strong, strong, strong movement towards the natural wines. In the United States, I see New York. San Francisco, and Los Angeles as power centers, with some movement in Chicago and Boston. There are so many good wines in the restaurants in New York, and here. Restaurants I think have fearless wine lists include Sycamore, Tapestry, Craigie on Main, the Formaggio Kitchen retail locations, and Forage.

Valerie: What's next for you?

Richard: I've been looking at some dessert wines from Pantelleria and some for Southwest France and Sauterne, not because anyone has asked for this, but because I tried them and was blown away. I thought, 'what the hell are you doing here and why doesn't the whole world know?!' At this point of my career, I don't need another Chianti. I need the inspiration from the work.

This post is part of our Friends and Family Interview Series. Read our last interview with Matt Jennings and stay tuned for the next one!