The Origins of Gorgonzola: Dolce and Piccante 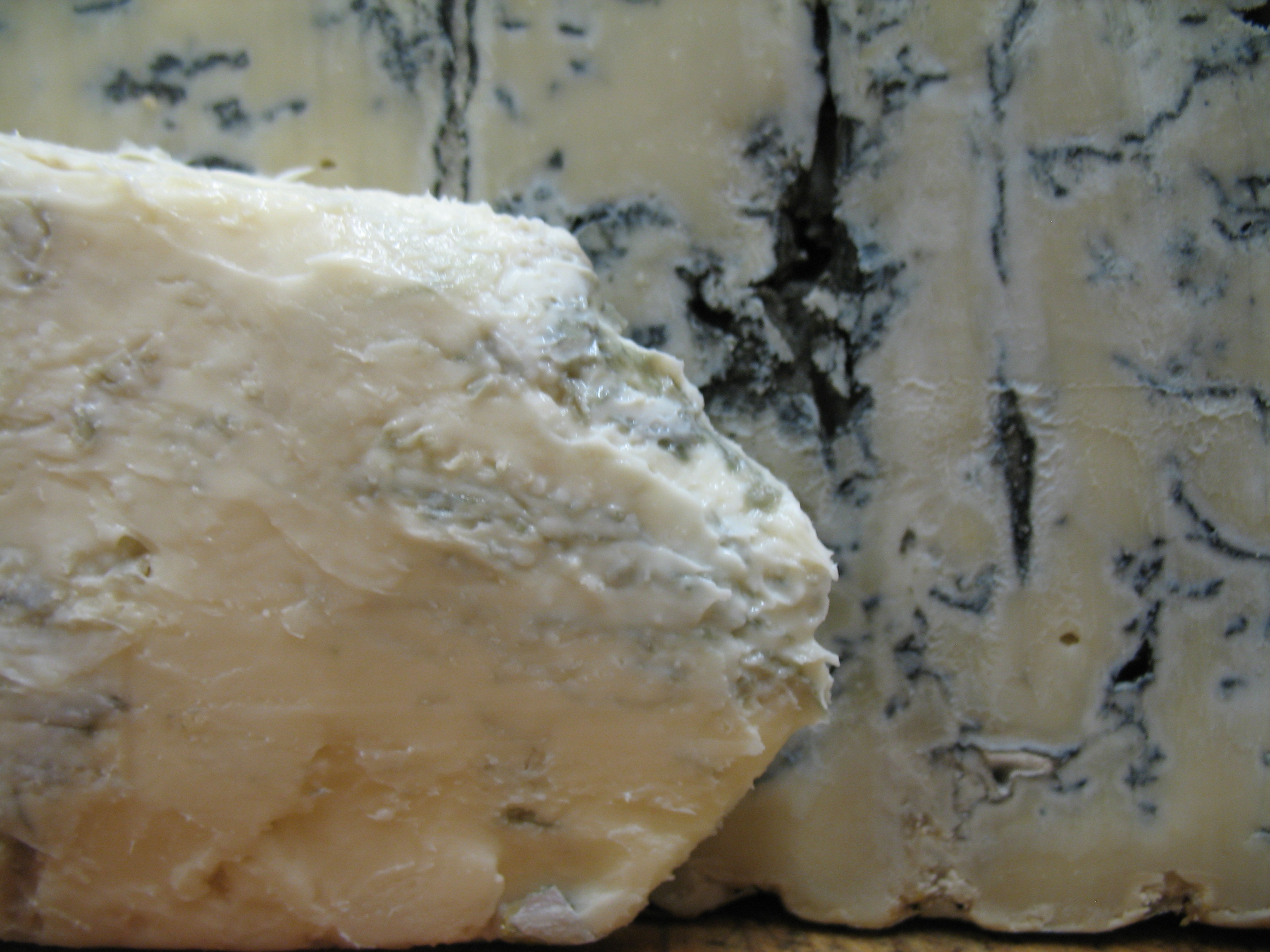 Lombardy is a region in the northernmost part of Italy, sitting on the country's Alpine border with Switzerland. The terrain is varied, ranging from plains in the southern part, to the Alpine heights of the Valtellina in the north. Lakes stretch out along the countryside and rivers criss-cross the verdant landscape. Lombardy is a part of Italy that is home to many well-known cheeses: Taleggio, Mascarpone, Provolone, Grana Padano and Gorgonzola. If you were to follow the Po River, heading west out of Lombardy, you would arrive in the Piedmont, another rich cheese-making region. The town of Bra, home to possibly the most widely respected cheese festival in the world, is situated in this part of Italy. Like their neighbors in Lombardy, cheesemakers of the Piedmont make Taleggio and Gorgonzola. Among the many cheeses in their canon, are other familiar names like Raschera, Robiola di Roccaverano and Castelmagno D.O.P.

What is interesting to me is that such a wide variety of cheese styles are represented in these two regions - including washed-rind, blue, cooked and fresh. This diversity is probably a byproduct of the fact that cheese has been made in the area for a very long time. Indeed, Gorgonzola is one of the oldest blue cheeses in the world. It was being developed at just about the same time as Roquefort in France, although on a somewhat smaller scale. In an odd coincidence, each of these blue cheeses has at least one genesis story revolving around young love. 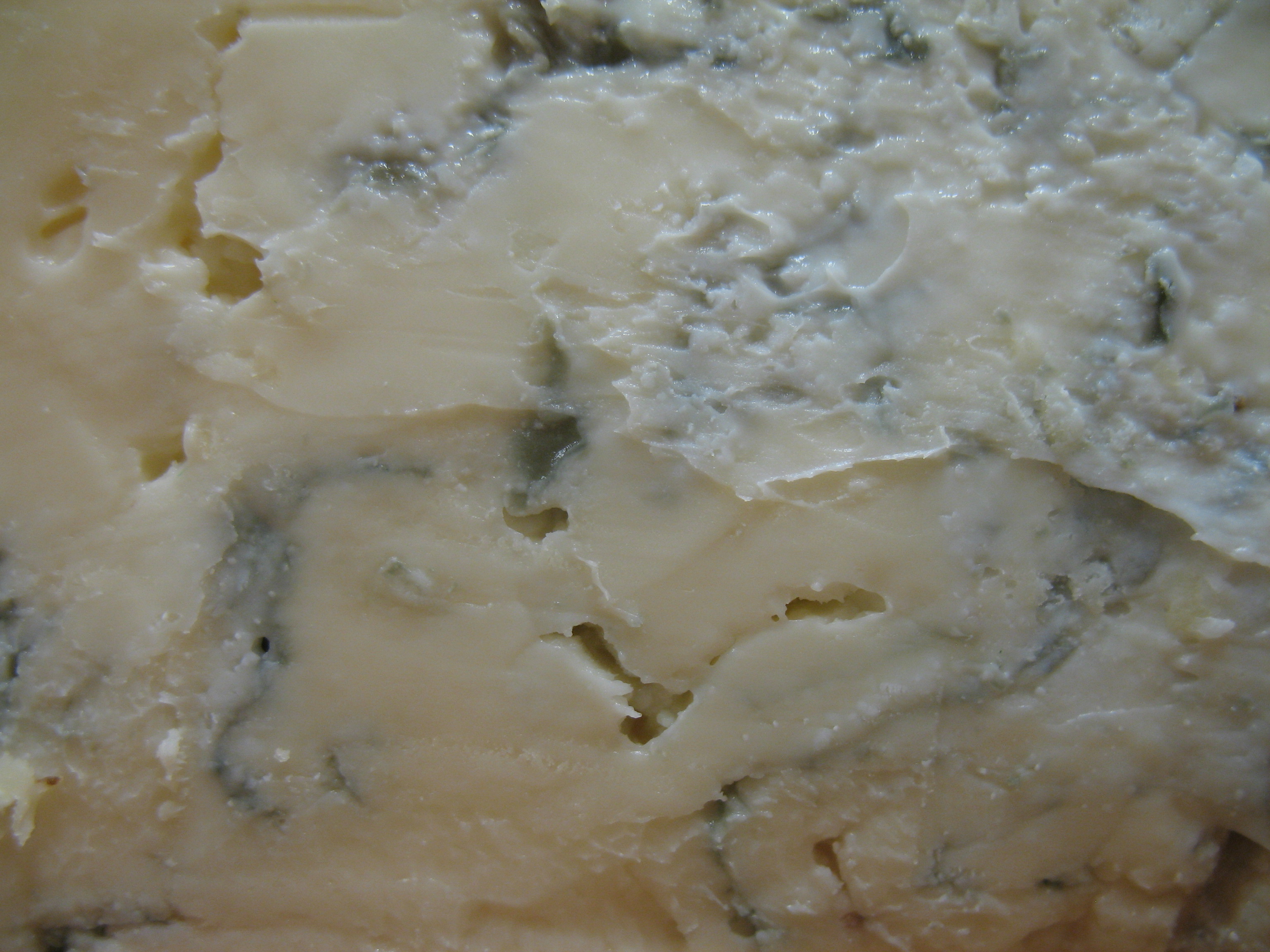 In France, Roquefort was apparently the result of a shepherd leaving his lunch (including a loaf of bread and a hunk of cheese) in a cave, while pottering off after a girl. When he returned some days later, both the bread and cheese were imbued with the blue mold of Penicillium roqueforti.

Meanwhile, in Italy, a young Romeo is purported to have been distracted by his lady-love, accidentally leaving his cheese curds to drain overnight. Hoping to hide his mistake, he mixed them in with the morning curd and a few weeks later noticed blueing. Upon tasting the cheese, he realized he had made an unintended but delicious discovery and Gorgonzola came into being. The Italians call this blueing “erborinato” which, like the French term 'persillé,' translates as “parsley-ed,” referring to the color and/or visual appearance of the cheese.

In his book, Cheese Primer, Steven Jenkins relates how the history of Gorgonzola is inextricably linked to another Lombardian cheese: Stracchino. As he tells it, the traditional pattern of transhumance in these regions was to herd cattle down from their Alpine pastures in the fall, to the southern lowlands for winter grazing. In the spring, the reverse journey would be made.

During these journeys, the cows would need to be milked at outposts along the way. According to Jenkins, the first of this milk seems to have been turned into the cheese known as Stracchino. It is my suspicion that this is the kind of cheese the young Romeo was trying to make when he stumbled on the process for Gorgonzola. Stracchino finds its origins in the Italian word “stracca” which means “tired” or “soft” – it is believed to refer to the fatigued cows who were making the journey. Gradually, the cheesemakers realized that these tired cows were giving better than average milk. Inadvertently, they had stumbled on the knowledge that exercise leads to a higher butterfat content in a cow’s milk.

One of the resting points for these weary Italian cows was near the town of Gorgonzola, a major center for trade. As a result, twice a year – in the spring and in the fall – the area was inundated with quantities of milk too large for the populace to drink. Gorgonzola was the result of a need to find a way to store the excess milk. After an evening milking, the curds and whey were separated. The curds were hung up in a cloth to drain overnight. 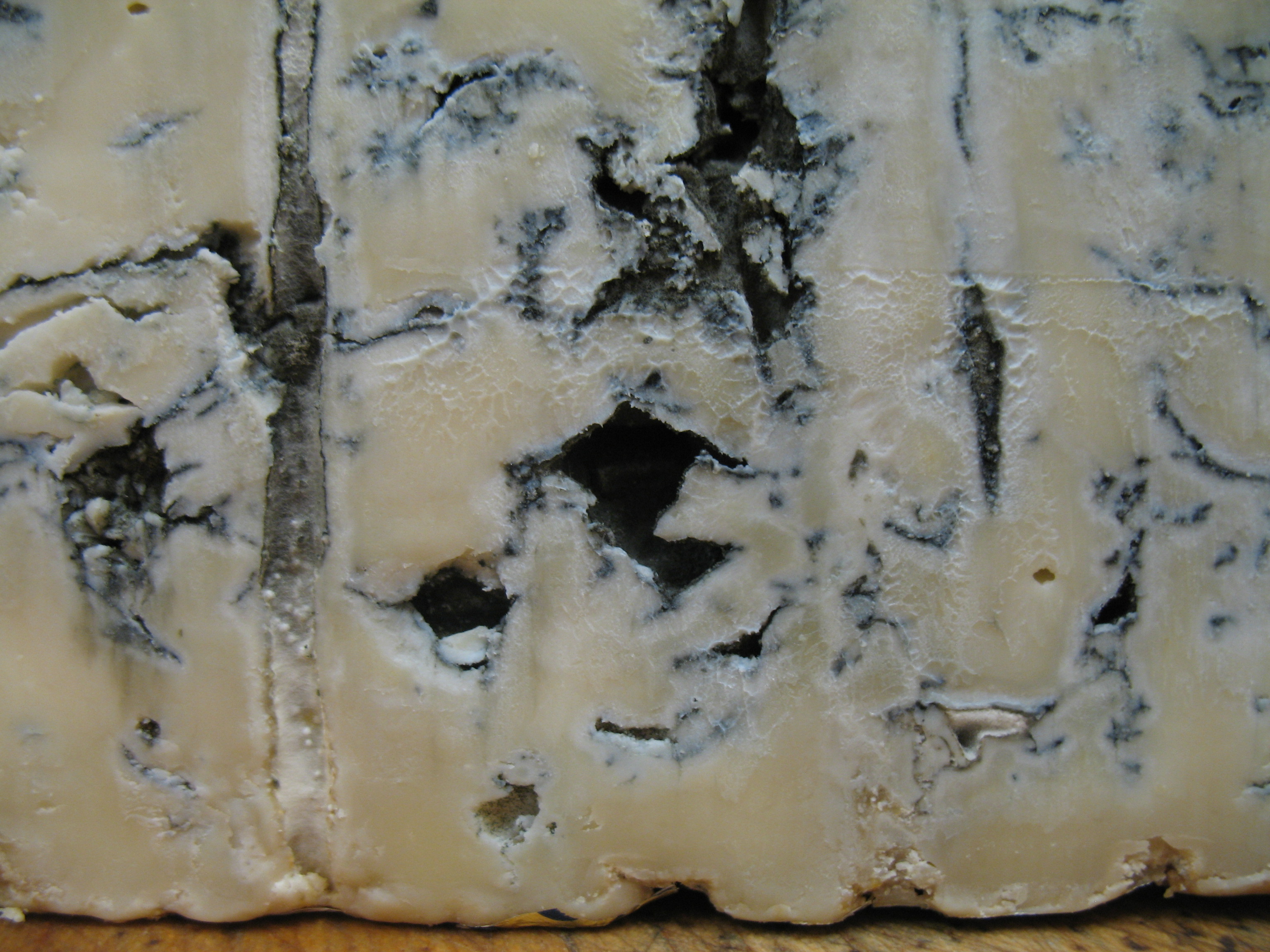 The next day, the night curds would be placed in a mold constructed of wooden rings, followed by the morning curds. The blueing in Gorgonzola occurred naturally – the mold was indigenous to the region and to the caves of Valsassina where the cheeses were aged. Over time, the Gorgonzola recipe evolved to showcase this natural phenomenon. Today, the bulk of the cheeses are pierced with needles at 4-weeks of age to encourage growth of the blueing culture that is used. In the World Cheese Book, Juliet Harbutt tells us that this piercing occurs in a place called “purgatory,” namely a very hot room with up to 95% humidity. This method means that the cheeses blue more quickly and, according Jenkins, finish their initial aging cycle in three months. Most wheels, however, are aged to at least six months. This compares to the historical, natural method which would involve cave aging of a year or more.

Gorgonzola is washed with brine as it ages, encouraging the development of bacteria that give off a distinctive smell (as with all washed-rind cheeses). The production of Gorgonzola is very heavily controlled to ensure that it conforms to certain standards of production - in the EU, it has Protected Designation of Origin (PDO) status and in Italy, it is a DOC cheese. In 1970, a consortium was established to monitor the production of the cheese, encompassing about 40 operations, ranging from family dairies to large factories. Only cheeses sanctioned by the consortium as authentic are stamped with a large “G” and the consortium now requires all DOC Gorgonzola to be pasteurized. 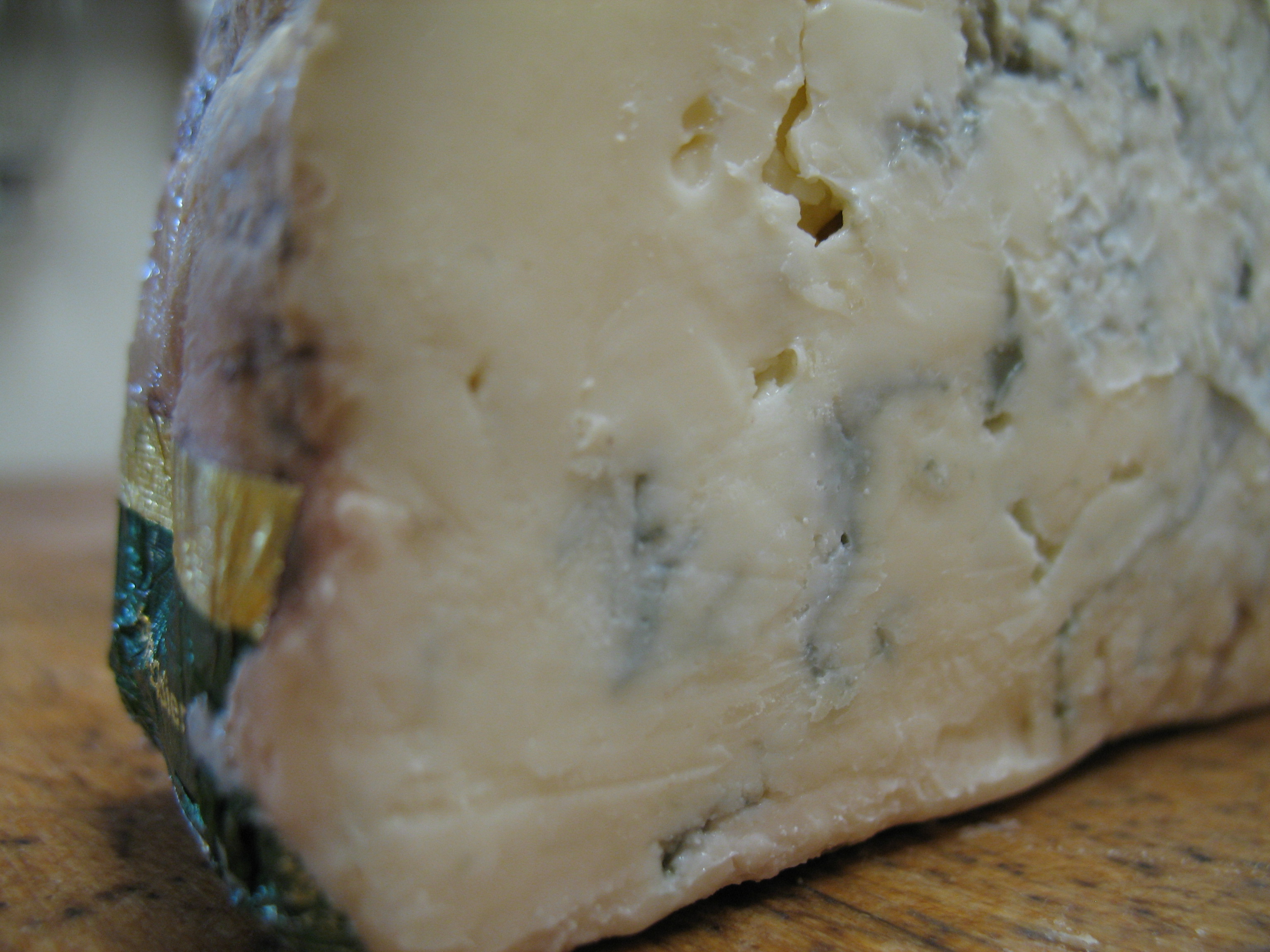 Gorgonzola, made according to the traditional method of hanging the curds overnight, is now rare – most examples of the cheese have the culture introduced to the milk at the beginning of the cheesemaking process. Interestingly, this apparently means more blueing but a milder flavor. The Slow Food’s guide to Italian cheeses**, edited by Roberto Rubino, Piero Sardo and Angelo Surrusca, tells us that when you do find cheese made with natural blueing (i.e. no inoculation), it is sometimes called Gorgonzola del nonno ('grandfather’s Gorgonzola') or Gorgonzola antico ('of the olden days'). Even rarer is the a due paste version of the cheese where the curds left overnight in the original method and are added to the milk of the following morning’s milking.

Here in the States, there are two types of Gorgonzola that are generally available – Dolce and Piccante. The former is sweet, milky, creamy with hints of spice. The latter is more aged – generally a year or more – and, as a result, is more piquant, firmer and crumblier. We have both at the shop: the Dolce is perfect for use in pasta dishes, paired with figs or simply spread on a slice of bread. The Piccante too is great in pasta (although as more of a crumbler at the end, rather than lending creaminess to a mac + cheese as the Dolce would) and, due to its more robust flavor profile, is great paired with honey on a cheese platter.

** For a more in-depth discussion of the steps that go into making Gorgonzola, definitely check out this book.