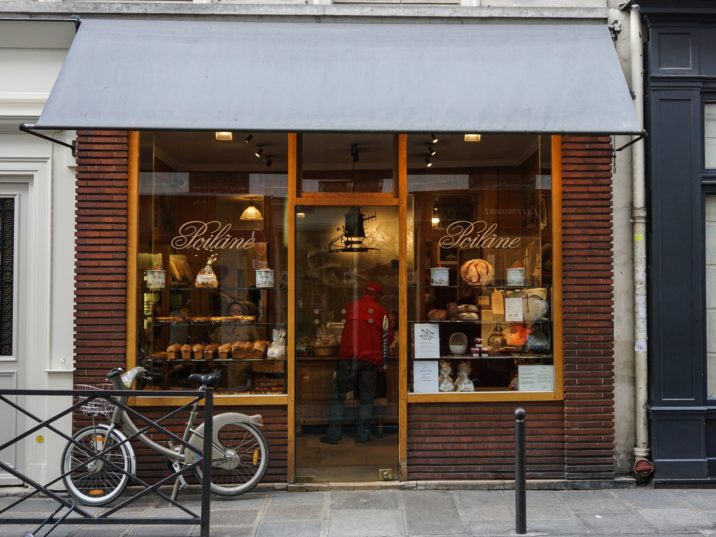 Formaggio Kitchen has been selling pain Poilâne for more than 20 years since the first time Ihsan met Lionel Poilâne in his tiny Paris bakery on the rue du Cherche-Midi. Kindred spirits, passionate about good food and good fun, Ihsan and Lionel hit it off quickly and Formaggio Kitchen became the first US retailer to fly in the famous bread each week.

On our recent visit to Paris, we took the opportunity to meet with our contacts at the bakery to get a refreshed view of their operation and to taste a selection of delicious products from their ovens.

A Historical Tour of Poilâne Bakery 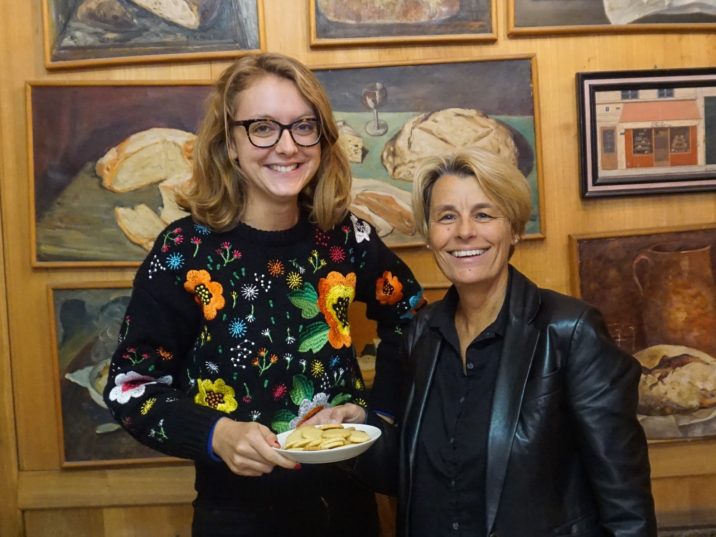 The first thing we noticed in the small room we were welcomed into was the array of paintings on the walls, all depicting large loaves of bread. Our hosts Genevieve and Diane noticed our curiosity and described the history of the paintings. The Poilâne bakery was started by Philippe Poilâne in 1932. During the second World War, food was limited--particularly so for those without much money. The Poilâne bakery was (and still is) located in the area of St. Germain near the École nationale supérieure des Beaux-Arts, in a neighborhood populated by many artists with few resources. Philippe wanted to help, and agreed to provide bread in exchange for paintings of his bread. This tradition has continued over the years. The Poilâne family has collected hundreds of such paintings, a small selection of which hangs in each of their locations. 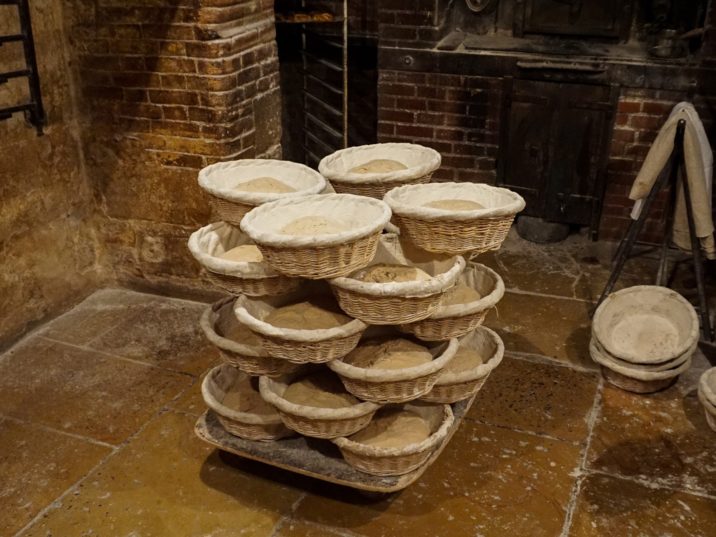 Philippe's son Lionel began managing the business as his father got older. Lionel was quite a personality, who wanted to preserve the work of his father while also fully enjoying life. Lionel was always interested in the creative ways of using dough and would often design breads with particular decorations such as an open book, a clock face, etc.

At one point, Salvador Dali became interested in dough as an artistic material. He asked Lionel to help him create some furniture made out of bread. There was some mention that Dali might have wanted to see if he had mice in his apartment. After the initial small work produced for Dali, Lionel and Dali collaborated to make a full bedroom set with a bed, bureau, and functioning chandelier. This collaboration was exhibited at a museum in France and a replica of the chandelier is recreated every several years to hang in the small office behind the retail floor of their rue du Cherche-Midi shop in Paris. 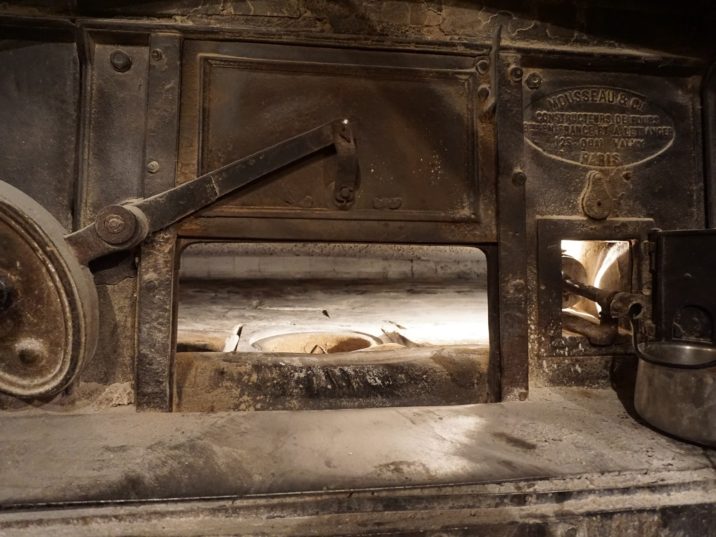 Their Paris location is the original bakery and operates with a single wood-fired oven in the basement, capable of baking 62 loaves of the 2kg miche levain. They use leftover hardwood from woodworkers and furniture makers to fuel the oven. They build the fire and use an iron vent to direct the heat throughout the oven. The oven interior is approximately 20 feet deep, 12 feet wide, and two feet high, so getting even heat throughout is very important.

When it is ready, they let the fire burn down and replace the iron vent with a pot of water, which will gently boil to give some humidity to the oven. Despite the work to bring the oven to an even temperature, it is important for the baker to have an intimate knowledge of the oven and how it bakes each product. Sometimes a bit hotter here and cooler there, the top may burn in this corner, but not in that corner, etc. These fine details can make a big difference in each batch of bread. Poilâne bakes several types of bread but also croissants, cookies, galettes, and other pastries. 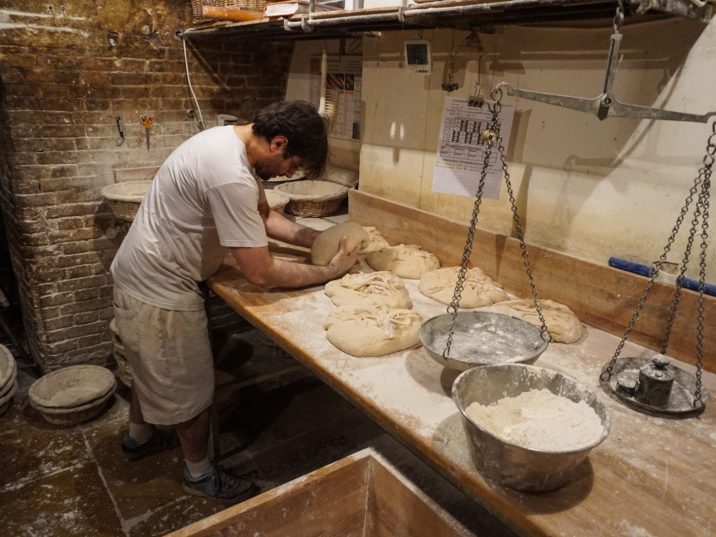 They prepare the miche bread using the same sourdough 'mother' they have had since the beginning of the business. They reserve a portion of the dough for the next day's production so that it will act as the ferment. This is one of the most important elements of bread production and gives each batch the consistent flavor that is unique to Poilâne. They have six bakers who take shifts to allow them to produce bread 24 hours each day. The baker cuts the dough and weighs each loaf to 2kg. Each loaf is very simply formed and loaded into a wicker basket lined with muslin cotton and dusted with flour.

Each loaf is slashed with a knife before entering the oven. This slash has taken the form of a cursive P over the years. It serves to not only add an attractive (and trademarked!) mark to the bread, but also to help the gas in the dough escape evenly, so that the loaf maintains its desired dense texture without any large holes.

As the loaves bake, bakers monitor and shift the loaves around the oven as needed to ensure even baking. Once complete, the loaves are removed and put onto a cooling rack, where you can hear their crust 'singing' in little cracking sounds. The loaves produced in the original oven are sold in the shop and to local restaurants and retailers.

In the 1980s, Lionel expanded the business, allowing them to keep up with demand while giving them room to grow. He built a separate bakery of 26 wood-fired ovens in the Parisian suburb of Bièvres. There, he could produce 100 loaves per oven (he specifically designed them to fit an exact number of loaves for easier management). With the opportunity to produce now 2600 loaves three or four times per day (assuming round-the-clock baking), Lionel was able to support all of his existing demand as well as develop a larger market throughout Europe and eventually throughout the world.

Ihsan Gurdal, owner of Formaggio Kitchen, traveled to France periodically and would always visit Lionel at the Poilâne bakery. Over the years, they got to know each other by shared professional acquaintances in the Paris cheese world and also because Lionel's daughter was attending Harvard University, right up the street from Formaggio Kitchen in Cambridge. In the mid-1990s, Ihsan started flying in pain Poilâne for his customers who knew it from their own trips to Paris. Ordered in small batches each week, the bread is baked and shipped the same day and received the next day in our Cambridge store.

Lionel and his wife died in a tragic helicopter accident while traveling to their home on an island off the coast of Brittany. Lionel's daughter Apollonia was 18 at the time and still studying at Harvard. She took the helm of the business all at once, amidst her terrible family tragedy.

Formaggio Kitchen is one of two or three US importers of Poilâne bread. We ship their loaves around the US to customers who know and love the unique and delicious flavors and textures that you cannot find in any other bread.

In addition to the country, currant, and walnut loaves we sell year-round, we are excited to welcome other Poilâne delicacies to the shop for the 2017 holiday season. For the first time, Poilâne's granola, granola bars, rye bread, and famous Punitions butter cookies will be available.

Poilâne arrives every Wednesday at our Cambridge location. We are able to special order large quantities of Poilâne with one week advance notice. Outside of the Cambridge area, please place orders for Poilâne online.