Anson Mills founder Glenn Roberts grew up in San Diego, California, working at his mother's restaurant on weekends as a busboy. A man of diverse interests, after graduating from the University of North Carolina at Chapel Hill on a music and science scholarship, Glenn became involved in architectural history and the history of food. For several years between projects, Glenn worked with a rice geneticist in Texas to reinvigorate Carolina Gold Rice, and then began researching other regional heirloom grains of the era that he could throw into production more quickly.

By 2000, Glenn was milling grits for chefs in Georgia and the Carolinas and word of his incredible crops got around. Today, Anson Mills rice, corn, wheat, and many other crops can be found in the best restaurants nationwide, as well as on the shelves at Formaggio Kitchen. 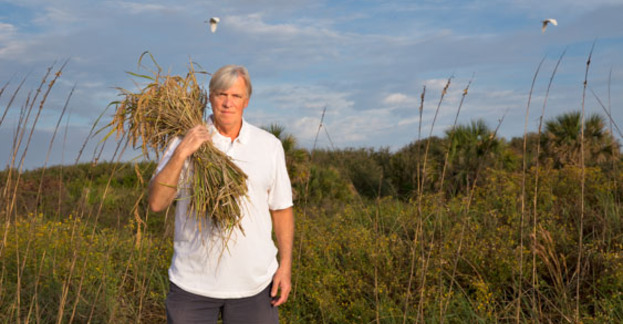 Online Media Manager Beth reached out to interview Glenn who replied quickly, “This is great! We love Formaggio and what y'all have done for American food and cheese!” He made some time to chat while driving around the hollers in Appalachia.

Beth: How did your relationship with Ihsan and Valerie begin?

Glenn: Kay met them first. She was a long time Boston person in food; a chef-y type. All these people still know each other really well. Kay, Chris Schlesinger, Barbara Stratton, and other people from that timeline went to culinary school and/or worked together way back in day at Harvest, starting there before they branched out. Later, Kay went into food journalism. Chris and Doc Willoughby were hired at Gourmet working Ruth Reichl, and Kay worked with them there for a time as well. Chris and Ihsan I think were friends way before Kay met Ihsan and Valerie. In 2004, Kay introduced me to them - we went to a Barbara Lynch restaurant and had dinner. And later, we all went to Providence while Kay was writing for the New York Times and I’m not exaggerating when I say I was the dumbest person at the table. I remember having this stark revelation: I was with people I shouldn't have been sitting with, and I’m supposed to be an informed food person! But, it was obvious they were so much more in tune with global foodways. I was watching their food and and blown away listening to their insights. Valerie saved me from falling off table - she was really sweet. Valerie and Ihsan, being who they are, kept asking me, “what do you do?” I said, “I grow corn and rice.” They said, “Interesting. Can we try some?”

Beth: That’s how Valerie and Ihsan find a lot of our products. They meet people who are makers and ask what they can taste, always on the hunt for new things. How did you start doing business in Boston?

Glenn: Lydia Shire was actually the first person to give me a break in the United States, and it all started in Boston.They say local boys never do good in the south. Lydia called all of her friends including anyone, woman or man, who cared about Italian food at the time, including Mario Batali's partners.

Frank DeCarlo and a few chefs in New York who are humble also contributed. Frank grew up on a farm understanding how cereals relate to food culture and why. Chefs usually have to learn that stuff backwards because so many farms bang out industrial stuff.

Beth: How do cereals relate to food culture?

Glenn: I don't want to get too esoteric, but the demarcation of understanding how agriculture and food resonates is very simple in cereal. There are two worlds of kitchen - the live kitchen and the provision kitchen. There are very few farming and milling entities investing and producing live kitchen ingredients. The live kitchen is based upon heirloom grain that is viable, aerobic and new crop - essentially anything right out of the field. The provision kitchen is based upon dormant grain that is anaerobic and barely respiring. All grain is live (aerobic) from just after harvest for 2 to 4 months… it breaths oxygen like humans and has amazing flavor and texture profiles.

Anson Mills produces exclusively live ingredients. They’re perishable. I had a conversation with Ihsan way back about having to use refrigerated display for Anson Mills ingredients. He said, “I don’t care. It’s cool. Just send it.” Ihsan and Valerie understood perishability immediately, which happens as soon as you apply oxygen to anything in the grain world. Without refrigeration, live grain ingredients behave like fresh herbs that have been cut, chopped, and left sitting on a counter... you can’t expect them to be as vibrant.

Beth: Tons of restaurants around the country make dishes with Anson Mills products. Where can we find the best preparations? Alternatively, if you could pick one of these restaurants for dinner tonight, where would it be, and what would you order?

Glenn: Probably anywhere, but in Boston, Tony Maws is cooking honestly and brilliantly. Tony has asked more questions than any chef that I’ve ever dealt with, except possibly Thomas Keller, Charlie Trotter, or Mario Batali. Tony doesn’t care what others think - he asks questions in terms of his cuisine and follows his ideas. He is also one of our longest supporting clients. He orders everything personally. One of his last orders included Farro Verde… smoked very young green wheat. We had just produced some fieldside by hand and Tony said, “I’m in.” I don't know what dish he cooked. We have a list of more unusual items that almost no one sees, and he pulls from that regularly. Tony doesn’t name purveyors or suppliers on his menus because he’s not interested in cluttering people’s minds with names [like Anson Mills], but in putting together alluring ideas to draw his clientele toward simple enjoyment of a very elevated culinary style.

Glenn: We work with about 4500 chefs worldwide and that list includes goes out to about 10 percent of them with limited availability live handmade heirloom ingredients. We make it available when chefs ask, but first make sure each chef is ready to play with this kinky stuff -  the flavors are pretty far out there. There are about 50 to 150 new and never repeated ingredients each season that are not on our website because we can’t provide them in large quantities.

Beth: How much of your business is supported by chefs vs. retail?

Glenn: Chefs worldwide are the bulk of our business. Retail stores [like Formaggio Kitchen] make up about half of a percent. Retail sales online account for 12% and the rest is through chefs. We load all of our best ideas into the retail website where Kay runs the ship. By doing this, we speak directly to our community of cooks and chefs. We believe cooks, especially chef cooks and advanced home cooks, drive culinary excellence everywhere - when you cook with an elastic approach, you expand the potential to innovate and create original culinary concepts that manifest in memorable palate impressions and a sense of well being. We make that distinction in our retail online meta approach to flavor development using our ingredients. It is important to note that everything we produce is pre-industrial by hand. In pre-industrial grain systems, the paradigm is: Flavor = Nutrition.

Beth: How often do you visit Boston? How does the food scene here shape up against other cities you visit?

Glenn: Boston is this massive vibrating intellectual place. I have a friend shooting a cutting edge documentary on heirloom cereal farming, and he began at MIT. His work drills down on knowing heirloom grain in the field and what those foods fresh from the fields looks like. Then he shows what a chef feeding people those same foods looks like in many different settings across America. No one would begin with an idea like that without the influence of Boston’s chef/restaurant scene backed up by this massive concentration of academic disciplines and their resonance with nutrition, flavor, culinary trends, or the intense investigation of historic foodways and ways in which they impact new food concepts. Boston is at once cerebral and driven towards simple and brilliant cooking. It is one of the finest places of culinary diversity on the planet.

Boston is Ground Zero. Getting to the farm quickly or having the farm come to you is important here, and I only knew Boston culture by phone until I met my wife, Kay. She showed up at Anson Mills to write a piece for the New York Times, but because she’s from Boston, she would not just interview me face-to-face. She said, “I want to see the fields.” Kay informed me that the most interesting and important journalistic pursuit involved learning about ingredients at the source - the farm. I found out later that this was the norm in Boston. It was ahead of Berkeley and ahead of the rest of the country at the time.

Beth: In addition to what I imagine is a vast number of heirloom grains and corn, what are some of your pantry staples?

Glenn: Right now, gochugaru [Korean chili flakes]. Kay is currently into fresh fruit and making her own kimchee, pickles and kombucha - these are everywhere in Kay’s kitchen now and appear beside or in everything! She’s doing a very old Korean version of Kimchee. So we have kimchees, masses of teas and spices because Kay is a tea freak. She shops at Formaggio Kitchen Online frequently, and gets the weirdest stuff that is totally delicious. I think the most interesting Formaggio ingredient Kay deployed in her test kitchen and at home this year is Puree d'Espelette. It’s hugely aromatic. Holy crap. And this tea - Kusmi Russian Morning Tea. Yum!

Author, Beth Wittenstein is the Online Media Manager and a Cheesemonger at Formaggio Kitchen South End.

This post is part of our Friends and Family Interview Series. Read our last interview with Richard Kzirian and stay tuned for the next one!